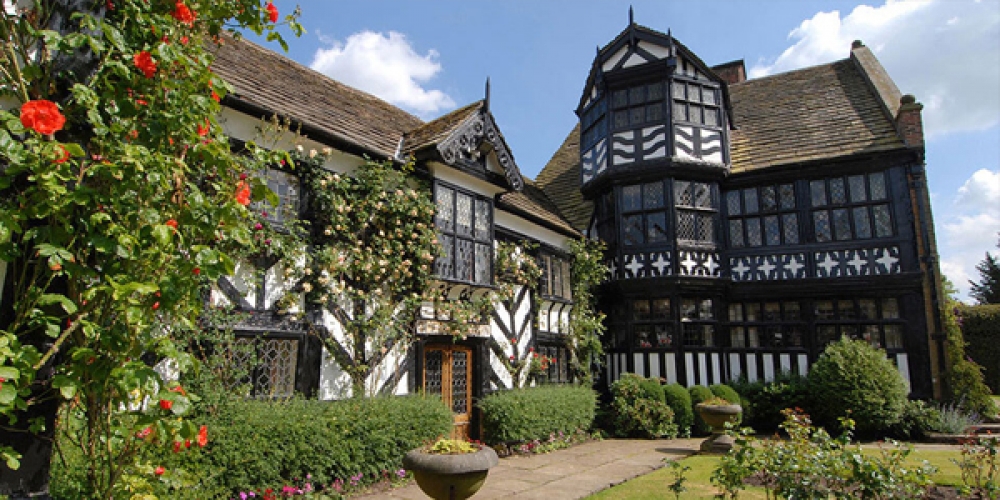 Wrapped in romance, intrigue and great charm, the Cheshire domain of Gawsworth has been held by only five families since Norman times. Today it is the home of Elizabeth Richards, and her sons Rupert and Jonathan.

Before the existing Hall was built in 1480, there was a Norman house where the rookery is now located. It is thought to have been a wooden, stockaded building, situated in the middle of what was then Macclesfield forest. The Fitton family chapel also pre-dates the Tudor Hall, being first mentioned by name in the charter of 1365, when a license was granted for ‘the administration of a domestic chapel within the house of John Fitton of Gawsworth’. Like most black and white houses, Gawsworth has been heavily restored.

On a tour of this Tudor manor house you will see fine paintings, furniture, sculpture and stained glass. The grounds are no less impressive with the ancient rookery and the Tilting Ground originally forming part of a vast Elizabethan pleasure garden built by Sir Edward Fitton in the late 1590s. It originally consisted of a wilderness garden, with long gravelled walk (now called the bowshot) giving views over the Cheshire plain towards the Welsh hills.

The first owners of the Hall were the Fitton family, knights in the Wars of the Roses and ancestors of Mary Fitton, briefly maid of honour to Elizabeth I and mistress of the Earl of Pembroke. Since the Richards family acquired it in 1962, the home has blossomed into offering weddings, concerts, live theatre and opera.

Tweet
Published in In and around Cheshire
back to top