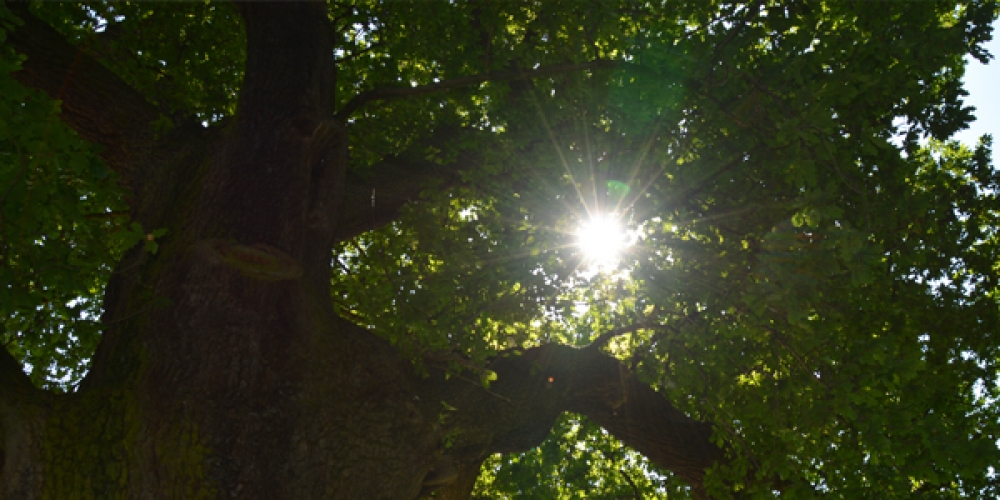 The oak tree which today stands opposite the entrance to Brick Kiln Lane is the second to be planted in the village to mark its place as the centre of the original County of Chester. The tree which was beautifully illustrated as a mature tree in the 1795 Kenyon watercolour, was probably planted in the early 1700s. It was felled in 1887 and replaced by the one we see today which was planted by Canon Thomas France-Hayhurst and Col CH France-Hayhurst in 1887, to commemorate Queen Victoria’s Golden Jubilee.

The oak is mentioned in almost every official reference to the village beginning with Bagshawe’s Directory of 1850 where it is described as ‘an ancient oak’.

The watercolour depicts the tree standing at the end of what is today an unmade lane leading to Bostock Green Farm and appears to be in the garden of Grange Cottage, allowing for the artist’s perspective and view point; this is probably the building just shown behind the tree. The small figure on the right appears to be walking down the unmade lane towards Sheep’s Green. The figure on the left is heading down Brick Kiln Lane. The man on the horse seems to be heading along London Road towards Davenham. In the original picture, the spire of St Wilfrid’s church in Davenham is clearly visible.

The oak tree today still planted in the hearts of locals as the centre of Cheshire.

Abridged text extract from A History of a Village and its People by Jane McLellan and Tony Bostock. The 1795 Kenyon watercolour is depicted on the front cover.